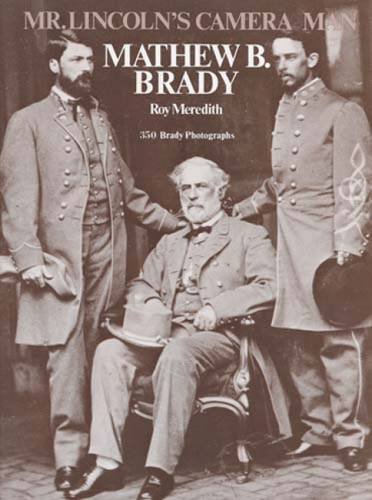 Mathew Brady, one of the foremost early American photographers and one of the earliest war photographers, was «official photographer» for the Union Army in the Civil War. With his assistants and his horse-drawn photographic wagon, Brady accompanied the troops and recorded the war firsthand. His war pictures are among the greatest war photographs ever taken, and constitute a prized pictorial record of American history.
A photographer much in demand by statesmen and celebrities, Brady amassed a gallery of distinguished portraits. Most famous of these is the «Brady Lincoln,» the photograph used for the engraving of the Lincoln head on the five-dollar bill. There are even photographs of Brady himself. But the heart of the book is the Civil War photographs: Battle Smoke, Union Wounded at Fredericksburg, Burnside’s Bridge over the Antietam, Death of a Rebel Sniper, Remains of the Dead at Chancellorsville, Embalming Surgeon at Work, Atlanta Ga. Just After Its Capture, and others. Meredith’s text tells the story behind many of the photographs and gives a lively account of Brady’s life and times.
In this Dover edition almost all the photographic prints have been reproduced directly from negatives and photographs on file at the Library of Congress — they are sharper and clearer than the reproductions in the first edition; numbers for all negatives are now included — a great boon to Brady picture research; and corrections have been made in the attributions of some of the photographs.