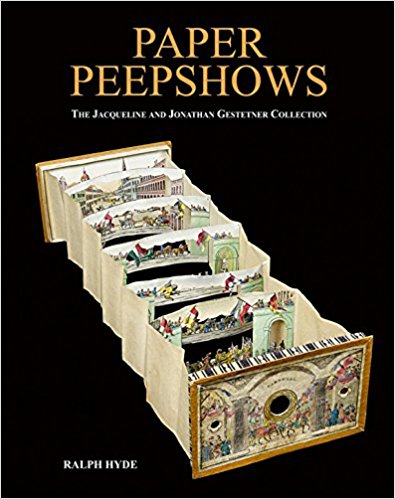 Peepshows were introduced in the mid-eighteenth century by Martin Engelbrecht in Augsburg. They called for a long wooden cabinet designed for purpose incorporating a viewing lens and sometimes a mirror. In the 1820s peepshows made entirely of paper appeared on the scene more or less at the same moment in Vienna, London and Paris. The clumsy cabinet was no longer called for. The new peepshow was equipped with paper bellows so it could be expanded or contracted in a trice. Paper peepshows were light; they were comparatively cheap. They fitted neatly into the pocket. Viewing a Paper Peepshow is an intimate, individual experience that, in the age of television and hand-held computers, gives a real sense of personal discovery. The viewer engages by peeping through a tiny hole and thereby discovers inside layers of images, like a pocket-sized stage set. The format lent itself to a wide variety of subjects: to coronations and to state visits and funerals, to pleasure gardens, to trips up rivers and to the ceremonial openings of new railways, to distant views of cities and to tourist landmarks, to military engagements in exotic places, and to the July Revolution and the fall of the Bourbons in France in 1830. The Crystal Palace, erected in Hyde Park 1851 for the Great Exhibition, inspired the production of very large numbers of peepshows, mostly made overseas and imported. Peepshows made possible visits to sites existing in the imagination, to plunge down Alice’s rabbit hole, for example, and to wander through the Garden of Eden in Paradise. The main center of peepshow manufacture in the nineteenth century was toy-making Nuremburg. Briefly in the 1950s it was Britain. Nowadays it is the United States. Paper peepshows are no longer intended essentially for children but for bibliophiles and art-appreciating adults. This stunning book charts the history of these charming collectables. The illustrated catalogue section includes the following data where known: country of origin, publisher, date, method of printing (eg chromolithograph), shape and dimensions, and number of scenes. As well as a full description of each piece, the author gives fascinating historical and cultural context for these items — ranging from depictions of the July Revolution (Paris, 1830), or the opening of the Thames Tunnel to the nursery tale of ‘Puss in Boots’. Contents: Foreword by Erkki Huhtamo (Prof. in the dept of Design Media Arts, University of California; Preface by Julius Bryant, Keeper of Word and Image, V&A; The Story of paper Peepshows; What we peep with; Austria; Canada; China; Denmark; France; Germany; Great Britain; Italy; Russia; The Netherlands; United States of America; Unknown Origin; Peepshow view boxes; Table-top Tableaux.